The author explores the current trends, challenges, opportunities and the impact recent updates in AS/NZS 4761 and emerging renewable energy technologies have on EEHA compliance and EEHA competency. The key for industrial electrical personnel to stay gainfully employed is to acquire skills and knowledge that will continue to be in demand during the operation phase of the plant i.e. Instrumentation and Control, EEHA, HV Switching Operations and Battery Storage including vehicle charging station etc. Despite the tough industry conditions and continual professional development required to stay up to date with current technologies, the careers are financially rewarding and professionally satisfying, for those willing to work hard.

The applicable EEHA Compliance Standard updated in consultation with industry, resolved some practical issues that industry has been challenged with. But it has also resulted in misalignments with UoCs covered in the UEE Training Package. AS/NZS 4761:2018 Competencies for working with Electrical Equipment for Hazardous Areas (EEHA) standard, covers various job functions. This standard has updated EEHA UoCs in consultation with industry, to meet the present and future needs of the industry. Significant changes in AS/NZS 4761:2018 revision, are:

UEE11 training package has been under review. The release of the UEE training package for accreditation by the states is due on 30 June 2019 by Australian Industry Standard (AIS)
The draft UoC UEENEEMxxx, reviewed by the Author in April 2019, have not been aligned with AS/NZS 4761.1:2018. Key areas of misalignment between AS/NZS EEHA units of competencies and UEE11 – Electrotechnology Training Package, are as follows:

The requirements for EEHA competency are different for electrical personnel working on an Australian Project overseas and Australian projects within Australia.
Any electrical work completed within Australia requires an unrestricted electrical licence, and the penalties for carrying out unlicensed work are severe. However, not all Australian resource projects are fabricated in Australia. It is often international overseas fabrication and shipyards that fabricate and construct a large section of projects, and sometimes entire projects are constructed outside the country before being brought into Australia by sea.

In the initial stages of Chevron Gorgon, EEHA compliance challenge has been acutely experienced by the Project Quality Assurance. It is estimated that over 80% EEHA inspection failed on the various skids fabricated overseas. Thus a competency gap in the skill set, with requirements of AS/NZS standards, for overseas electrical personnel, was identified. Learning from EEHA compliance lessons from Chevron Gorgon project, and to remedy the root cause to reduce EEHA fault, Chevron Wheatstone Upstream Project Quality Assurance team awarded a contract to PMV to train overseas electrical installers to AS/NZS 4761.1.

PMV has trained around 250 electrical overseas personnel including fabrication yards in Korea where Wheatstone Upstream Project modules were being fabricated. The number of reported EEHA compliance faults started to reduce with the rise in the skill set of overseas electrical personnel to AS/NZS 4761. The higher EEHA compliance on the incoming skids from overseas resulted in huge savings in the project cost that was required in EEHA remedial work during Gorgon Project.

The challenge is to have plant management involvement and endorsement to integrate plant MMS with EEHA inspection and remediation work regime. Routine EEHA Inspection provides an early warning of potential maintenance issues caused by environment factors. The author believes that EEHA periodic inspection activities can be viewed as a monitoring condition of electrical equipment in hazardous areas (EEHA). Opportunities are present to integrate EEHA periodic inspection with plant electronic Maintenance Management System (MMS) with the advent of software to record EEHA inspections.

An EEHA inspector should not only list what is not compliant in the EEHA installation but also clearly state the remediation action in consultation with the site supervisor. Such remedial action should be collated in the plant MMS. The responsible plant Electrical Engineer or Maintenance Supervisor should view EEHA inspection as a condition monitoring activity or a proactive maintenance strategy. EEHA inspection and plant condition monitoring techniques e.g. infrared radiography, help in early fault detection and hence prevention from potential failure, thus increasing plant life, availability and safety. It is for this reason that AS/NZS 60079.17 :2017 recommends the plant Electrical Instrumentation (EI) team upgrades its skills in EEHA inspection and remediation work.

The initial detail EEHA inspection process is time-consuming, due to its rigorous requirements to check and sign off installation as ready to energise. However, repeat EEHA inspection when performed manually is still time consuming, as it is desirable that you should retrieve the original EEHA inspection data.
With a recent trend towards database based EEHA software, it is now possible to complete inspections in much less time for ongoing EEHA compliance. Inspection Test sheets and reports can be easily generated on the day without significant administration delay. Software based inspection software-based inspection tools on the new and existing projects, if implemented smartly and linked with plant Maintenance Management System (MMS), yields improved procedural efficiency of EEHA inspection, plant maintenance and EEHA remediation work.

Impact of Renewable Energy (RE) and EEHA Compliance Requirements

With the cost of RE technology to generate reducing and likely to compete with fossil fuel, there is an emerging trend to generate PV Solar and Wind Energy.
Remote areas conventionally use diesel power. Though the use of solar and wind power to supplement Diesel power is picking up in remote areas, battery smoothing is the important issue in remote area power systems. For grid-connected PV Solar in city areas (roof top), the compliance requirements are stipulated in AS/NZS 4777.1:2016 and AS5033:2014. Solar farm compliance and reporting requirements are stipulated by Clean Energy Council.

In the off-grid system, there are issues about how much renewable energy can be integrated with diesel power. It depends on the diesel generation system stability. To overcome the problems associated with integration of the intermittent nature of RE, a battery-powered storage system is required to smooth the effect of power fluctuation. In WA, Horizon Power has realised this problem. Compliance requirements for these areas include control and protection specifications.

Most RE in domestic and industrial market is generated outside the hazardous areas and are grid connected. The impact of RE technology, when installed and operated within existing hazardous areas, is yet to be fully comprehended and a necessary code of practice is likely to emerge.

ATCO is developing an industry leading Clean Energy Innovation Hub (CEIH) based at the company’s Jandakot Operations facility in Western Australia which incorporates the production, storage and use of hydrogen, as well as the commercial application of clean energy in micro-grid systems. 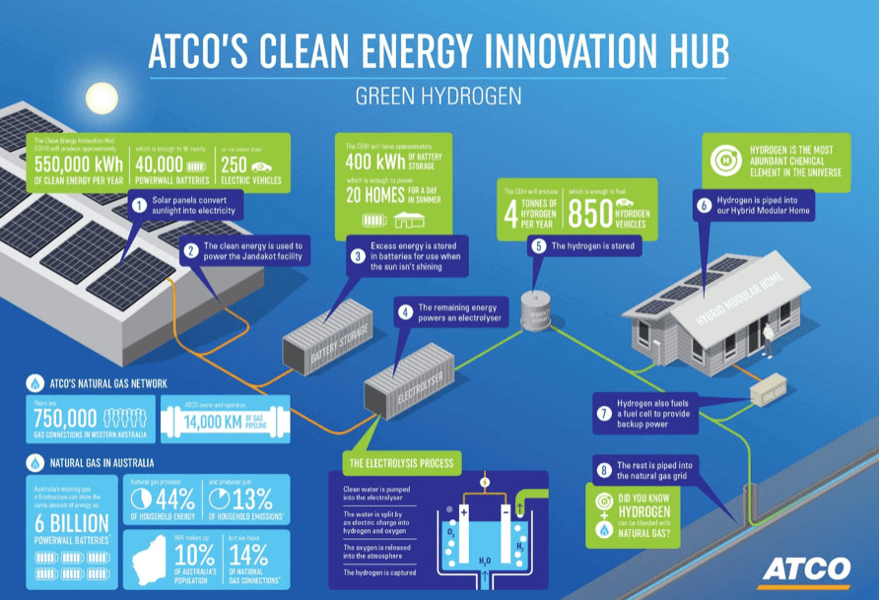 The CEIH will integrate ‘green’ hydrogen created by water electrolysis using solar energy to separate hydrogen molecules from water. The hydrogen will be captured and injected into a micro-grid system at the Jandakot facility. Refer https://arena.gov.au/projects/atco-hydrogen-microgrid/ Some of the safety and technical challenges that will be tackled by the CEIH project include optimising hydrogen storage solutions, blending hydrogen with natural gas and using hydrogen as a direct use fuel. Hence there clearly exists a Hazardous Area.

Approximately 1100 solar panels will be installed at the Jandakot Operations Centre, capable of generating 300kW of power. The CEIH’s design stores 400kWh of energy in batteries with excess renewable energy utilised to power an electrolyser to produce hydrogen which can be stored or injected into the micro-grid for testing as a direct fuel or blended with natural gas.
Project is in the construction phase. The Author has developed a Conformity Assessment Document (CAD) for some of the overseas certified electrical equipment being used on the project.

Is EEHA Competency Adequate for an Electrical Personnel?

The key for industrial electrical personnel to stay gainfully employed, is to acquire skills and knowledge that will continue to be in demand during the plant operation. Technological innovation in artificial intelligence, remote monitoring of industrial and domestic devices, and lowering cost of PV + Battery Storage, is bringing about a new wave of change in the way we live and the need for new skills required in the electrical industry. All these advances in electromechanical systems require the electrical personnel and technicians to keep pace with the evolving technology.

Modern plants are now equipped with systems and devices that are needed to measure and regulate variables such as temperature, pressure, flow, humidity, liquid level, velocity and density. Industrial Automation allows these technologies to control and monitor a process plant using concepts such as feedback, cascade, feedforward and advanced process control. There is a critical shortage of automation, instrumentation and control engineers, technicians and technologists around the world now due to the retirement, restructuring and rapid growth in new technologies and industries. The respected International Society of Automation (ISA) organisation estimated that at least 15,000 new automation engineers are needed annually in the US alone, where a quick search on a recruitment website such as Jora shows over 150 jobs for instrumentation technicians and electrical personnel being advertised at a given time.

Let’s explore different indicative career pathways for electrical personnel in the oil and gas and mineral processing industry to become a “Technical Authority”.

The oil and gas and mineral processing industries offers an exciting variety of career opportunities, both offshore and in technical disciplines onshore. While working in this sector may be associated with intense shifts and hard-working conditions, it is well-known for high salaries, chances to travel the world, as well as working with cutting-edge technologies. Working conditions vary from being in a ‘cushy’ office with personal assistants to working onboard remote platforms or mine sites in extreme weather conditions. The most intense work schedules are probably the onshore and offshore rigs or at some mineral processing plants in the middle of nowhere. 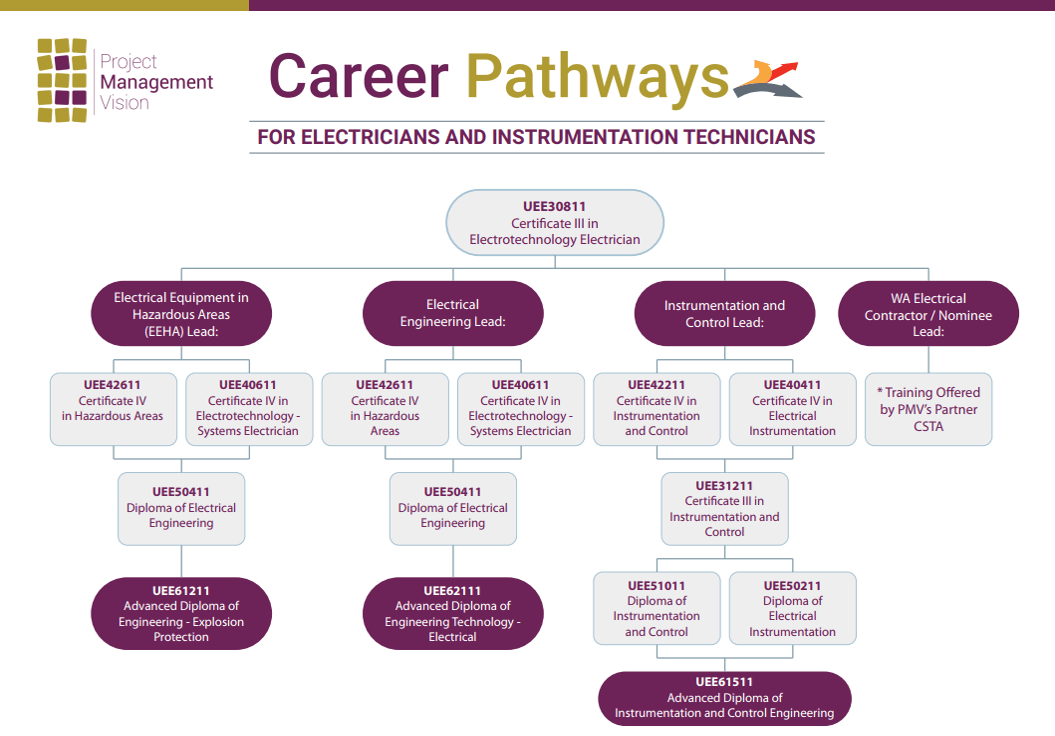 The key for the industrial personnel to stay gainfully employed is to acquire skills and knowledge that will continue to be in demand during the operation phase of the plant i.e. Instrumentation and control + EEHA + HV switching operations + Battery storage including vehicle charging station + Cyber Security + Internet of Things (IoT).

Despite the tough industry conditions and continual professional development required by electrical personnel needed to stay up to date with the current technology used in the industry, the careers are financially rewarding and professionally satisfying, for those people who are willing to work hard.

Source: This article will be presented during the Hazardous Areas WA Conference in Perth, ATCO

Certificate III in Instrumentation and Control